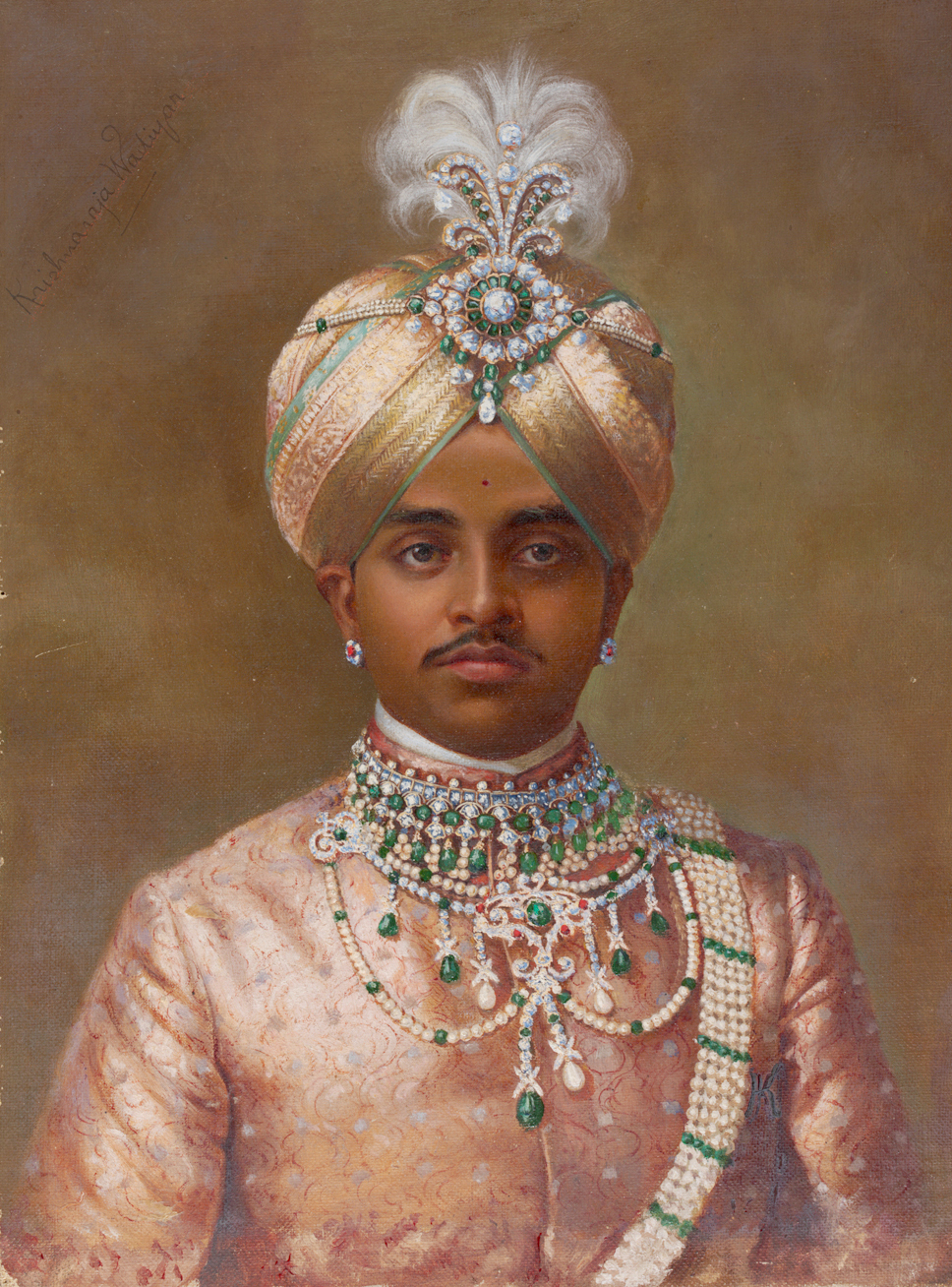 Maharaja Krishnaraja Wadiyar IV was the twenty-fourth maharaja of the Kingdom of Mysore, from 1894 until his death in 1940. At the time of his death, he was one of the world's wealthiest men, with a personal fortune estimated in 1940 to be worth US$400 million, equivalent to $7.4 billion at 2020 prices. He was the second-wealthiest Indian, after Mir Osman Ali Khan, Nizam of Hyderabad.

He was a philosopher-king, who was seen by Paul Brunton as living the ideal expressed in Plato's Republic. He has been compared to Emperor Ashoka by the English Statesman, Lord Samuel. Mahatma Gandhi called him Rajarshi, or "saintly king", and his kingdom was described by his followers as Rama Rajya, an ideal kingdom akin to the rule of Lord Rama. Acknowledging Krishnaraja Wadiyar IV's noble and efficient kingship, Lord John Sankey declared in 1930 at the Round Table Conference in London, "Mysore is the best administered state in the world".

The vernacular name Nalwadi Krishnaraja Wadiyar comes from the word "nalwadi" meaning "the fourth" in Kannada. 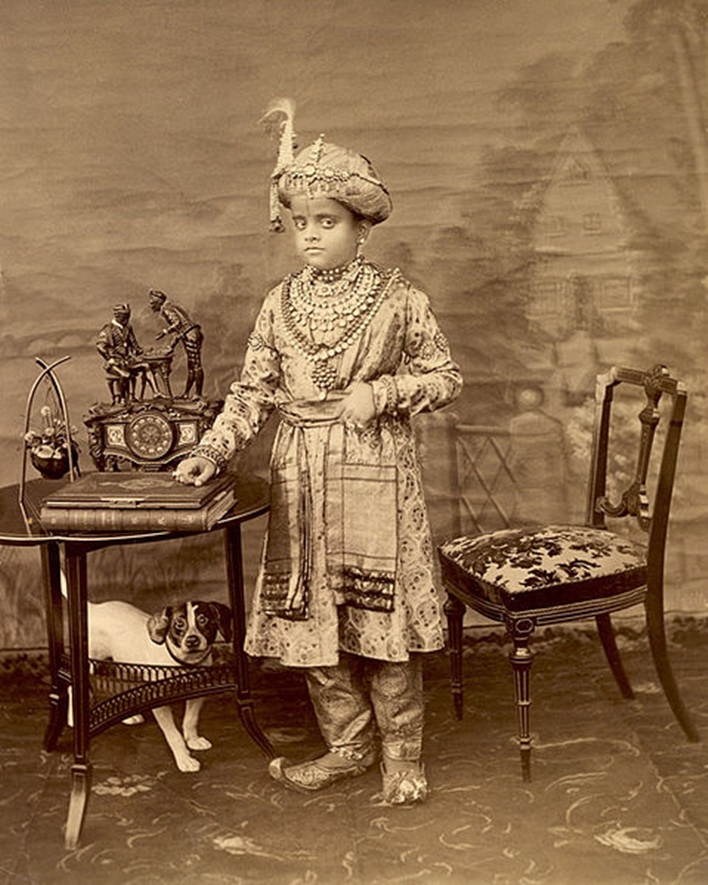 A photograph of Krishna Raja Wadiyar IV taken 2 February 1895, a few months before his eleventh birthday.

The Maharaja had his early education and training at the Lokaranjan Palace under the direction of P. Raghavendra Rao. In addition to Western studies, he was instructed in the languages of Kannada and Sanskrit, and was taught horse riding and Indian and Western Classical music. His early administrative training was imparted by Sir Stuart Fraser of the Bombay Civil Service. The study of the principles of jurisprudence and methods of revenue administration was supplemented by extensive tours of the state during which he gained extensive knowledge of the nature of the country which he was later to govern. 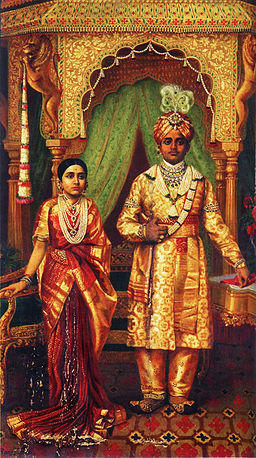 On 6 June 1900, he married Maharani Pratapa Kumari Ammani of Kathiawar (b. 1889), the youngest daughter of Rana Sri Bane Sinhji Sahib, Rana Sahib of Vana in the Kathiawar region of the present-day Gujarat State.

Shortly after the death of his father Maharaja Chamarajendra Wadiyar X on 28 December 1894, Krishnaraja Wadiyar IV, still a boy of eleven, ascended the throne on 1st February 1895. His mother Maharani Kemparajammanni ruled as regent until Krishnaraja Wadiyar took over on 8 February 1902. Krishna IV was invested as the Maharaja of Mysore, with full ruling powers, by Viceroy Lord Curzon on 8 August 1902 at a ceremony at Jaganmohan Palace. Krishnaraja Wadiyar set up educational infrastructure. The king was an accomplished musician, and like his predecessors, patronised fine arts. For these reasons, his reign is often described as the 'Golden age of Mysore'.

Krishna Raja Wadiyar was the first chancellor of Banaras Hindu University and the University of Mysore. The latter was the first university chartered by an Indian State. The Indian Institute of Science at Bangalore, which was initiated during his mother's tenure as regent, was functionally started during his reign, with the gift, in 1911, of 371 acres (1.5 km²) of land and a donation of funds. He was a patron of Indian, both Carnatic and Hindustani, and Western classical music.

Mysore had been the first Indian state to have a Representative Assembly, a democratic forum in 1881. During Krishna Raja Wadiyar IV's reign, the Assembly was enlarged and became bicameral in 1907 with the creation of the legislative council, a house of elders which introduced much new legislation for the state. During his reign, Mysore became the first Indian state to generate hydroelectric power in Asia, and Bangalore was the first Asian city to have street lights, first lit on 5 August 1905.

During his 39-year reign as Maharaja, Krishna Raja Wadiyar IV had the following Dewans (prime ministers) :


During his reign, he worked toward alleviating poverty and improving rural reconstruction, public health, industry and economic regeneration, education and the fine arts. Such were the strides that Mysore made during his period that Gandhiji was moved to remark that the Maharaja was a Rajarishi ("a saintly king"). Paul Brunton, the British philosopher and orientalist; John Gunther, the American author; and the British statesman, Lord Samuel, were also among those who heaped praise on the king. Lord Sankey said during the Round table conference that Mysore was "the best administered state in the world". Princes from other sections of India were sent to Mysore for administrative training. The Pandit Madan Mohan Malaviya described the Raja as "Dharmic" and Lord Wellington echoed the sentiment by calling Mysore's industrial development "incredible". In an obituary, The Times called him "a ruling prince second to none in esteem and affection inspired by both his impressive administration and his attractive personality".

Patron of the Arts

The Raja was a connoisseur of Carnatic and Hindustani music. He played eight musical instruments: flute, violin, saxophone, piano, mridangam, nadaswara, sitar, and veena. Members of the Agra Gharana, including Nattan Khan and Ustad Vilayat Hussain Khan, were guests of the Maharajah in Mysore, as were Abdul Karim Khan and Gauhar Jan. Barkatullah Khan was a palace musician from 1919 until his death in 1930.

Asthana Vidwan Kadagathur Seshacharya has written various works and is famous for his contributions towards Sanskrit and Kannada Literature. He also wrote many poems in Kannada.

Mahatma Gandhi and the Maharaja

Mahatma Gandhi praised the Maharaja of Mysore in 1925 for taking up spinning, to the benefit of himself and his subjects.